Pandemic 3 is a very exciting game that is played by a lot of people online. The game is basically about spreading a disease and killing human beings completely all around the globe. During the game, players form teams before working together to complete the task. Every aspect of this interesting game is realistic and interactive for the players.

Diseases in the game
Pandemic 3 includes 3 disease classes: virus, parasites and bacteria. Beginners to this game normally choose bacteria since it is well rounded. Players will gain more evolution points with the virus classes. Every disease has varying symptoms. Players are able to sell or even buy symptoms based on the game. The popular symptoms in pandemic 3 are coughing, sneezing, heart failure, fever, boils, sores, depression, blindness, hypersensitivity and nausea.

Players will buy the symptoms based on the resistance and transmission in different regions for the diseases. Players use heat, moisture, cold or drug to overcome or block the use of vaccines in these regions. Players have to look into different climates and regions so as to transmit the diseases accordingly. Therefore, the game will involve the players to think more so as to make the best use of the available resources. Players are able to transmit the diseases through rodents, air, water or insects depending on the regions. Making this choice is quite challenging since players will have to track the region conditions and events in order to spread the virus with ease. The visibility,infectivity and lethality of the diseases is monitored in the screen.

Regions in the game
Players will start attacking region by region while easily viewing the complete details of the regions. The players are able to differentiate clean, forsaken and infected regions in the screen. Players will have to attack all the clean regions and spread the diseases. The goal of pandemic 3 is only complete after all regions have been infected with different diseases thus ending human lives.

As a way of responding to the attack, the government will engineer different vaccines. Transport means and hospitals are then availed to people. Different vaccines are then developed while players work hard on keeping visibility of the viruses as low as possible so that the government does not create any form of panic. The population of the regions keeps on changing as people move across the different regions. It is usually tricky to think as well as take a choice between the different options that are available in the game. Schools can also be a target for players since they also increase the spread of the disease. 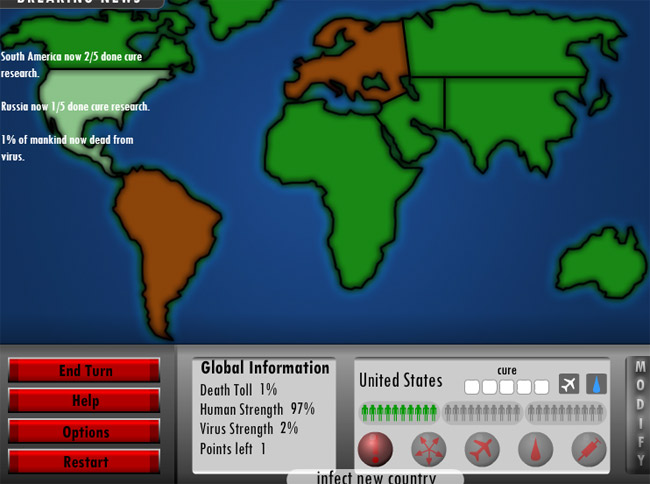 Pandemic 3 is a game that gives players complete involvement and they enjoy using different help options and attributes. The notification and map are very helpful and players will make use of a number of strategies in order to win. With increases in online audience, a good number of websites are delivering quality gaming environments for people. It is much thrilling and very interesting to get to online websites and play pandemic 3 game. The support and options are phenomenal and it is a game open to all kind of people. Online gaming is interactive with the better functionality that is offered by different gaming platforms that have been designed for gaming enthusiasts.