It’s easy to get lost among the many football flash games out there, but we’d like to present you one that truly stands out. Field General, a game produced by ESPN Arcade just like CrunchBall 3000, invites you to play some American Football! The game offers you a chance to control an NFL team and proceed through stages by getting as many points as you can. Exceptional graphics and easy yet realistic game-play make this a unique football experience for any player, a sports fan or not. Carefully access the situation in front of you, make smart decisions, and help your team advance, as you grow to become a true Field General.

This game is focused on aiming, passing the ball, and reaching the end zone to score. You start off leading the offense as the quarterback and later controlling the wide receiver as well. As you enter STAGE 1 and start playing, first position the target on the path of the receiver. Then aim your pass carefully and throw when the timing feels right. Don’t hesitate too long before you pass, or your POCKET PROTECTION bar will run out and your quarterback will get sacked. You’ll be able to control the receiver when the ball successfully reaches his hands, allowing you to storm through the field for an awesome touchdown! The game will save your progress automatically, making it possible for you to start from your last completed stage every time. If you manage to proceed through all the 15 stages, unlocking them one by one, you will lead your team to become champions and claim the winners’ cup. 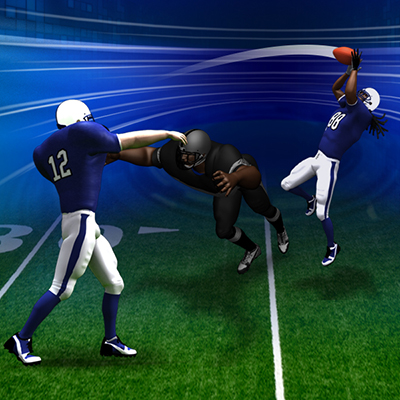 As you start off controlling the quarterback in Field General, you’ll be able to control the position of your target by using the I (UP), J (LEFT), K (DOWN), L (RIGHT) buttons and use the Space Bar to pass the ball. If the pass is accurate, you will automatically switch to controlling the receiver. Now you can run toward the end zone by using the I, J, K, L buttons again. Depending on your progress in the game, you will be able to use special moves and earn extra pass attempts. The special moves are activated with the A (Pump Fake), S (Pocket Expander), and D (Accuracy) keys. These moves can only be applied once per play, however, points are deducted for using special moves, so you might want to make sure you use them wisely!